Another family holiday, this time was a crowded one. The main objective was to make the kids happy, so the destinations - Singapore and Johor - were chosen just to fulfill that goal. Here are some recollections, recommendations, and reminiscence from the memorable holiday :)

- is where we stayed during the short trip. Not too expensive like the hotels in Orchard Road, but still it's pretty decent for kids and the location is also very good. Not far from City Hall station, there is Watson just next door and 7-11 across the street. Recommended! Ow, and the best thing is there's no Indonesians staying at this hotel so you can talk freely in Bahasa Indonesia without worrying somebody will eavesdrop :D

We chartered a bus from Singapore because our group was quite big (17 people). The traveling time was not so bad, about an hour from Singapore to Johor Baru. But the process of getting off the bus to go through Immigration check points (one in Singapore and one in Malaysia) was pretty exhausting, especially for the kids. Finally we made it to Legoland, and since it was a weekday, the place was not too crowded. We almost successfully riding all the rides :)

It's true, though, that Legoland is more suitable for kids below 10 years old. The rides are quite slow and children friendly. They even have two roller coasters, one is for younger kids (like Alap-alap in Dufan). Yofel was pretty excited. Too bad the 4D theater didn't function well, the scent and moving functions didn't work, although the kids related well with the Chima story (you only understand this if your kids play Lego, trust me).

Another cool ride is the Dino Island, but it's not eligible for kids whose heights are below 120 cm. It's like Niagara-gara in Dufan, but instead of Indians and cowboys, there are dinosaurs made from Lego. Too bad Yofel can't ride it.

One of Yofel's favorite rides is the Junior Driving School. Here, kids pretended to enter the driving school, and learn to ride a car (again, made from Lego, very cute). At the end of the ride, they are allowed to have a driving license (although you'll have to pay R35 for this haha).

At the end of the day, we gave the kids a chance to shop for their favorite Lego. My tip is to prepare extra money to buy Lego in one of the shops, because it's worth it, the price is cheaper up to IDR 200k.

We got back to Singapore by our bus, and again, had to pass through the Immigration checkpoints. This time it's more challenging because the kids were already really tired and cranky. My suggestion, if you have extra money and extra time, it's better to spend one night in the Legoland Hotel, and you can also try the waterpark.


3. Dinosaurs Dawn to Extinction (and Annie Leibovitz Exhibition!)
The next day, our group split up and we took Yofel to ArtScience Museum in Marina Bay Sands. The building has very cool design, modern and sleek with spacious rooms for the exhibitions. Dinosaurs Dawn to Extinction was almost over, we were lucky it's still there when we visited the museum. The good news was, there's an exhibition of Annie Leibovitz at the 3rd floor and the combo ticket price was quite cheap, so my sister and I decided we will stop by the Annie Leibovitz exhibition after done with the Dino.

But first thing first: Yofel was soooo excited and happy with the dino exhibition. It showed the most wonderful things: real fossils, edutainment related to dinosaurs, replicas of jungle and even the almost real fighting scenes between the fierce dinos.

The audio, video, even 3D demos were very descriptive and interesting. For kids like Yofel, there were some cool games and activities that suitable for children and toddlers. I wish this kind exhibition will visit Jakarta in the future!

Next, my sister and I went to the 3rd floor to see the Annie Leibovitz photo exhibition. I love the spacious, light gallery where the exhibition was held, and I love how the gallery arranged Annie's photos chronologically. My most favorite is of course the Leonardo DiCaprio's one :D

4. The Sound of Music

We were very lucky we could watch Sound of Music the musical in Marina Bay Sands Mastercard Theater. This was actually the first time I took Yofel to a musical so I was pretty nervous. Will he make a scene? Will he be bored?

The theater itself is amazing- it's large with live music performance below the stage. The acoustic quality is marvelous and the stage design is beautiful. The performance is wonderful, too. Although coming from Broadway, the theater gave opportunity to Singaporean to also perform. So from the 7 Von Trapp's kids, there's one Singaporean :)

Yofel unexpectedly loved the performance. He sat in the children special stool provided by the theater and enjoyed the musical scenes, especially the Do Re Mi one :) But he was a bit confused because there were some scenes different from the movie. And Yofel got bored during the conversation scenes, especially that involved only the grown ups. He fell asleep after the intermission, but I'm so proud of him for accompanying me in this amazing musical :)

Singapore is crazy about running (like Jakarta) and now there are lots and lots of running track. Too bad I didn't bring my running shoes, but one evening we decided to walk from our hotel to the Fullerton area, passing by the running track (and many runners!) to the Merlion. The atmosphere was so nice, and the view was beautiful.

Next time I visit Singapore, running shoes are in my packing list :) 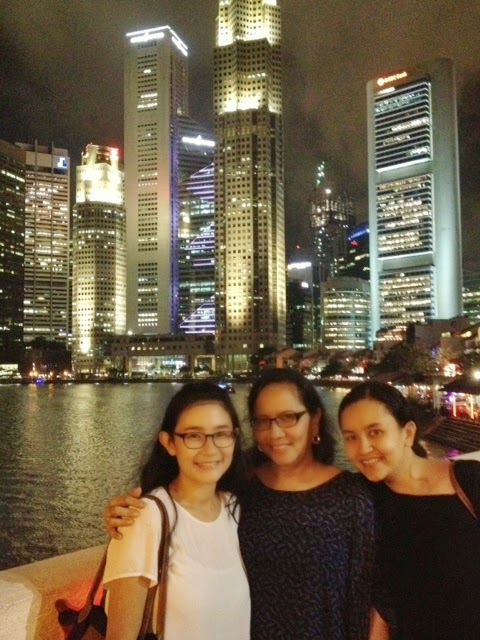 Astrid
A lucky mum of her gorgeous baby boy, and a grateful wife of her extremely wonderful guy. addicted to books, tv series, and online shops. currently living in the crowded city of jakarta. trying to live her life to the fullest.